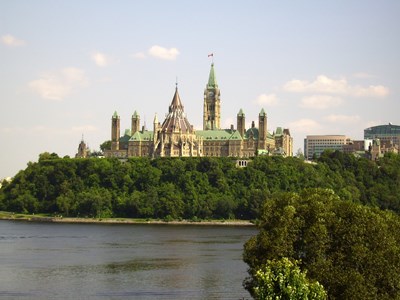 ABOUT CANADA
Canada is the second largest country in the world and the largest in North America. Renowned worldwide for its vast, untouched landscape, its unique blend of cultures and multifaceted history, Canada is a major tourist destination and one of the world's wealthiest countries.
Source: Wikitravel
Popular Goals

Montreal is the second-largest city in Canada and the largest city in the province of Quebec. Originally called Ville-Marie, or "City of Mary", the city takes its present name from Mont-Royal, the triple-peaked hill located in the heart of the city, whose name was also initially given to the island on which the city is located, or Mont Réal as it was spelled in Middle French, (Mont Royal in present French).

Vancouver is a coastal city located in the Lower Mainland of British Columbia, Canada. It is named for British Captain George Vancouver, who explored the area in the 1790s. The name Vancouver itself originates from the Dutch "van Coevorden", denoting somebody from Coevorden, a city in the Netherlands. The largest metropolitan area in Western Canada, Vancouver ranks third largest in the country and the city proper ranks eighth.

See Niagara Falls from the Canadian side

Toronto is the largest city in Canada and the provincial capital of Ontario. It is located in Southern Ontario on the northwestern shore of Lake Ontario. A relatively modern city, Toronto's history dates back to the late-18th century, when its land was first purchased by the British monarchy from the Mississaugas of the New Credit. The settlement was later established as the Town of York and proclaimed as the new capital of Upper Canada by its lieutenant-governor, John Graves Simcoe.

Banff National Park is Canada's oldest national park, established in 1885 in the Rocky Mountains. The park, located 110–180 kilometres west of Calgary in the province of Alberta, encompasses 6,641 square kilometres of mountainous terrain, with numerous glaciers and ice fields, dense coniferous forest, and alpine landscapes. The Icefields Parkway extends from Lake Louise, connecting to Jasper National Park in the north.

Newfoundland and Labrador is a province of Canada on the country's Atlantic coast in northeastern North America. This easternmost Canadian province comprises two main parts: the island of Newfoundland off the country's eastern coast, and Labrador on the mainland to the northwest of the island. A former colony and dominion of the United Kingdom, it became the tenth province to enter the Canadian Confederation on 31 March 1949, named simply as Newfoundland.

Go to Vancouver
Vancouver is a coastal city located in the Lower Mainland of British Columbia, Canada. It is named for British Captain George Vancouver, who explored the area in the 1790s. The name Vancouver itself originates from the Dutch "van Coevorden", denoting somebody from Coevorden, a city in the Netherlands. The largest metropolitan area in Western Canada, Vancouver ranks third largest in the country and the city proper ranks eighth.

Visit the Bay of Fundy

The Bay of Fundy is a bay on the Atlantic coast of North America, on the northeast end of the Gulf of Maine between the Canadian provinces of New Brunswick and Nova Scotia, with a small portion touching the U.S. state of Maine. Some sources believe the name "Fundy" is a corruption of the French word "Fendu", meaning "split", while others believe it comes from the Portuguese fondo, meaning "funnel".
Festivals and Events

Go to the Calgary Stampede

Watch a performance of the Royal Winnipeg Ballet troupe

Attend the Oktoberfest in Waterloo

Attend the Jazz and Blues Music Festival in Charlottetown

Party at the Ukrainian Festival in Dauphin

Attend the Ottawa Bluesfest
Other Goals

Take the train across Canada

Go to the Toronto Zoo

Take a train through the Rocky Mountains

Skate on the Rideau Canal

Take a dip in B.C. hot spring when there’s snow all around

Visit all provinces and territories of Canada

Climb the stairs at the CN Tower

See a game at the Rogers Centre

Visit the Historic District of Quebec

Skate on the Rideau Canal, the longest skating rink in the world

Watch the Toronto Blue Jays play at the Rogers Centre

Go on an artic safari to see belugas and bears

Visit the Green Gables at Cavendish

Go up the CN Tower

Stroll on the beaches of Toronto’s Centre Island

Kiss a cod and throw back a screech of rum in a St. John’s pub to become an honorary Newfoundlander

Spot mummies and dinosaurs at the Royal Ontario Museum

Ride the Polar Bear Express train from Cochrane to Moosonee

Look out for Killer Whales in the B.C. Coast

Do a wine tour of the wineries in the Okanagan Valley in B.C.

Take a Thousand-Islands boat cruise out of Gananoque

Skate the entire length of the Rideau Canal

Visit the Canadian Museum of Civilization in Quebec

Have a picnic on the lawns around Ottawa River

Sleep in the northernmost lodge in the world -- Arctic Watch Lodge

Witness the grandeur of the Notre-Dame Basilica in Montreal

Have a picture taken with a scarlet-clad Mountie

Visit the Hockey Hall of Fame

See the Anne of Green Gables musical in Charlottetown

Take a wildlife tour by dog-sled from Iqaluit

Wander through 22 hectares of flowers at Butchart Gardens in Victoria

Canoe across the lakes in Algonquin Park

Dodge icebergs on a boat tour of Newfoundland’s Iceberg Alley

Walk the sea floor around the Bay of Fundy islands

See the remains of the Haida villages in B.C.

Chew on hot bagels and Montreal smoked meat at Schwartz's

Hike the Bruce Trail in the ancient Niagara Escarpment

Visit the Art Gallery of Ontario

Dig for amethysts near Lake Superior near Thunder Bay

Ride every rollercoaster at Wonderland

Watch for whales where the Saguenay River meets the St. Lawrence

Revel in dinosaur history in the Royal Tyrrell Museum

Ride a luge down the Olympic run at Calgary's Olympic Park

Explore a coal mine in Glace Bay

Sleep in the West Point Lighthouse

Visit the Art Gallery of Alberta

Pan for gold at one of the mines in Yukon

See the archaeological sites at Grand-Pre at Nova Scotia

Drive across the Saskatchewan prairies

Try salmon fishing off a tugboat

Greet the summer solstice in Arctic Bay, the northernmost point of Baffin Island

See the fossil forests of Joggins

Go deep-sea fishing off the coast of Prince Edward Island

Take a train across Canada

Roam through the Queen Charlotte Islands by ferry or cruise

Pamper your senses at a floating lodge at a B.C. resort

See local artists at work in the Niagara-on-the-Lake

Eat perogies and halopchies in Vegreville

Travel the Northwest Passage by icebreaker

Visit the Fortress of Louisbourg

Explore the Prince of Wales Fort in Manitoba

Relive the gold rush by hiking the Chilkoot Trail

Visit the Ripley’s Aquarium in Toronto

Feel the drumbeats at a native powwow on Manitoulin Island

Visit the Canadian Museum of Nature

Take the heli-jet from downtown Vancouver to Victoria

Camp on the banks of Lake O’Hara

Go sea-kayaking in the north of the country

Visit Nunavut and the Northwest Territories

Join a day-long archaeological dig for dinosaur bones at the T.Rex Discovery Centre in Saskatchewan

See the Perce Rock at the tip of Gaspe Peninsula

Pet a sea cucumber at the Shippagan Marine Centre

Tour the oil sands near Fort McMurray in Alberta

Fly in by floatplane to marvel at the Athabasca Sand Dunes

Take river cruises at The Forks in Winnipeg

Get lost in the West Edmonton Mall's water parks

Learn about native cultures at Circle of Life Thunderbird House

Scuba dive around the shipwrecks at Tobermory

Visit the Archives of Ontario

Tour the Inuit workshops at the West Baffin Eskimo Co-operative

Travel with an aboriginal family on the trapline

Discover the birth place of Canada in the Province House

Witness a RCMP sunset ceremony at the Saskatchewan

Visit all Canadian provinces and territories

Take a ride on the Edmonton Queen Riverboat

Go heli-skiing or boarding in the Bugaboos in B.C.

Stroll the perennial gardens at The Forks in Winnipeg

Mountain bike in the Kootenays

Haul in the lobster traps aboard a Shediac Bay cruise

Visit the site of the Halifax Explosion

Learn about the Dene culture during an educational tour

The Bay of Fundy
The Bay of Fundy is a bay on the Atlantic coast of North America, on the northeast end of the Gulf of Maine between the Canadian provinces of New Brunswick and Nova Scotia, with a small portion touching the U.S. state of Maine. Some sources believe the name "Fundy" is a corruption of the French word "Fendu", meaning "split", while others believe it comes from the Portuguese fondo, meaning "funnel". 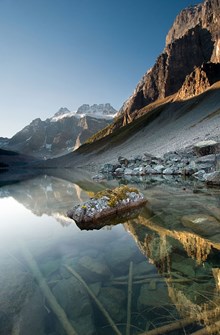 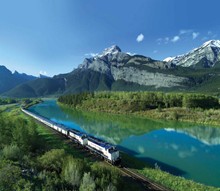 Explore Canada by Train
The Canada train trips on this list offer stunning scenery and are considered more than just transportation from point A to B. Although train travel tends to be more expensive than bus or even air travel, train travel is relaxing and scenic. The romance of the train is alive and well on Canada's major rail systems. 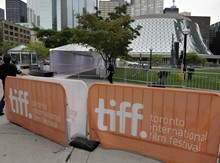 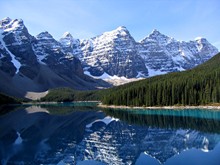 Moraine Lake
“
Moraine Lake is a glacially-fed lake in Banff National Park, outside the Village of Lake Louise, Alberta, Canada. When it is full, it reflects a distinct shade of blue. The colour is due to the refraction of light off the rock flour deposited in the lake on a continual basis." 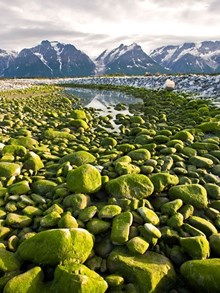 Float the Tatshenshini-Alsek River
“
The opportunity for a true wilderness expedition experience in the U.S. is slowly disappearing. The best bet you have left is a float down the Tatshenshini-Alsek river system (which does, however, require that you start in Canada). It’s not so much the isolation that makes the standard nine-day to two-week, 140-mile (255-kilometer) trip from Yukon’s Dalton Post to Alaska’s Dry Bay so sublime as it is the scenery."