54 people have been here. 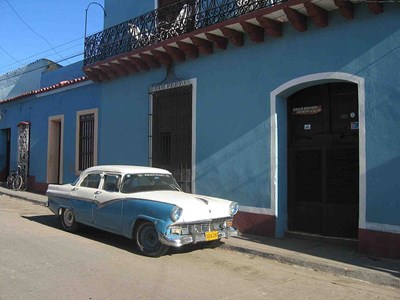 ABOUT CUBA
The Republic of Cuba is an island country in the Caribbean. The nation of Cuba consists of the main island of Cuba, the Isla de la Juventud, and several archipelagos. Havana is the largest city in Cuba and the country's capital. Santiago de Cuba is the second largest city. Cuba is home to over 11 million people and is the most populous island nation in the Caribbean.
Source: Wikipedia
Popular Goals

Havana (officially Ciudad de La Habana) is the capital city, major port, and leading commercial centre of Cuba. The city is one of the 14 Cuban provinces. The city/province has 2.1 million inhabitants, the largest city in Cuba and the largest in the Caribbean region. The city extends mostly westward and southward from the bay, which is entered through a narrow inlet and which divides into three main harbours: Marimelena, Guanabacoa, and Atarés.

Smoke a Cuban Cigar at Havana

Trinidad is a town in the province of Sancti Spíritus, central Cuba. Together with the nearby Valle de los Ingenios, it has been one of UNESCOs World Heritage sites since 1988.

Visit Hemmingway’s suite at the Hotel Ambos Mundos where he wrote ‘For Whom the Bell Tolls’
The Hotel Ambos Mundos is a hotel of square form with five floors, built with an eclectic set of characteristics of 20th-century style architecture. It was built in 1924 on a site that previously had been occupied by an old family house on the corner of Calle Obisbo and Mercaderes (Bishop and Merchants Streets) in La Habana Vieja (Old Havana), Cuba. It is a frequent tourist destination because it was home to the popular writer Ernest Hemingway for seven years in the 1930s.

Viñales is a small town and municipality in the north-central Pinar del Río Province of Cuba. The town consists mostly of one-story wooden houses with porches. The municipality is dominated by low mountain ranges of the Cordillera de Guaniguanico such as Sierra de los Órganos. Typical outcrops known as mogotes complete the karstic character of the landscape.

Witness the Trinidad Way of the Cross Procession

Stay with a Cuban family

Have a glass of hot chocolate at the Museo del Chocolate

Visit the mausoleum of Ché Guevara at Santa Clara

Hike in the Sierra del Rosario

Dive into the deep around Isla de la Juventud at Varadero

Visit the Historic Centre of Cienfuegos

Visit the seaside town of Baracoa

Visit the Historic Centre of Camagüey

Take a tour of the Capitolio in Havana's centre

Spend the day at the beaches of Sana María

Smoke a cigar in Cuba

Get a taste of Cuban Cuisine at La Esperanza

Party Seaside on the Malecon in Havana

Drive down the scenic route of La Farola

Gallop through the tobacco fields around Trinidad

Sip on a mojito at La Bodeguita del Medio

Ride a horse down the cobbled streets of Trinidad (UNESCO)

Attend a beach party at Varadero

Swim in the turquoise waters of the Caribbean in Playa Ancón

Watch the Afro-Cuban performance of the Ballet Folklorico Cutumba

Dicover underground rivers in the caves around Pinar del Rio

Go diving in one of the biggest reefs at Cayo Coco

Learn how to roll a cigar at the Partagas Cigar Factory

Smoke a cigar in Havana

See the Granma, a cabin cruiser that carried both Castros and Ché back to Cuba

Take a stroll along the Malecón with local fishermen, families and couples

Drive a classic car in Havana

Explore the Moncada Barracks where Fidel Castro launched his uprising

Walk in the footsteps of the revolutionary army to Pico Turquino

Soak up the sun at Playas del Este near Havana

Experience the culture of Havana

Trek in the Viñales areas of Pinar del Río

Have a mojito and a cigar in Cuba

Learn how to do the Congo from a local

Have a daiquiri at El Floridita

Sierra del Rosario
“
UNESCO has classified the Cuba's 'biosphere reserves' as exceptional sites for their flora and fauna: the Sierra del Rosario in the Pinar del Rio province, the Guanahacabibes peninsula, a forest reserve that once sheltered the last Indians fleeing the Conquistadores and finally the Baconao Park in the Sierra Maestra, the largest natural reserve on the island."